Wind turbines represent a huge investment. A signficant concern when operating a wind turbine is the after effects caused by a lightning strike.

Did the thunderstorm damage any of the turbines in a wind turbine park? First of all, which turbines were actually hit? 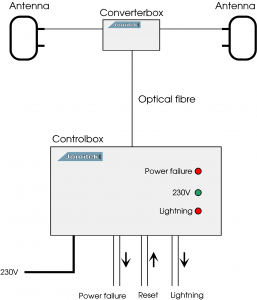 The classic Jomitek lightning sensor can help answer those questions. With a solid track record since 1998 the Jomitek lightning sensor has provided reliable lightning indication on thousands of wind turbines. The information is often used as a direct relay signal to the wind turbine emergency brake, or at least as a trigger for an extra service visit to the turbine. In this way effects caused by damage to the wind turbine blades, electrical installation, or other mechanical damages, can be adressed before they develop further. 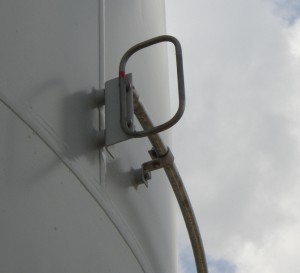 The antennas are made for the extreme environment found outside on off-shore wind turbines.

Mounting of the antennas might be on pre-welded adapters on the tower or by use of a wire-kit for later installation. Some towers allow for through hole mounting into the tower.

The antennas are typically placed below a 10 meter level with respect to the surrounding terrain – a height where all lightning currents will pass, but also a positioning that will never experience direct strikes.